A healthy ecosystem can retain phosphorus in a plant available form. Soil health is commonly described though physical, chemical and biological components.
This poster was presented at 3rd European Sustainable Phosphorus Conference 2018 (ESPC3).

Phosphorus availability to plants and its potential to pollute waters is commonly evaluated through measuring soil phosphorus with extractants which emulate plant root exudates. Several different extractants have been proposed, and there is no clear consensus on what method to use. In addition some work has highlighted that it is the phosphorus saturation (i.e. ratio of phosphorus to iron and aluminium), which is more relevant for both plants and emissions. However the plant availability and emissions depend also on other factors: soil quality and soil health. We studied 24 Finnish test fields intensively from 2015-2018 to identify factors which could influence phosphorus emission risks and plant availability. The fields had varying soil types (clay, peat and sandy) and cultivation backgrounds. The fields were tested for phosphorus concentrations using ammonium acetate, Mehlich 3, H3A, hydrochloric acid and water to give a range of phosphorus solubilities. In addition the phosphorous uptake was measured and several soil quality indicators were assessed (e.g. aggregate stability, water infiltration, microbial respiration, soil structure, rooting depth). The fields were found to differ more in their soil health parameters than in their phosphorous concentrations, which opens possibilities for increasing phosphorus uptake and decreasing emissions by improving soil health.

Soil phosphorous has traditionally been managed from a chemical concentration viewpoint. For plant nutrition, the levels should be high enough to ensure adequate plant uptake. In contrast for the environment, the levels should be low enough to prevent excessive emissions. Phosphorus saturation thresholds have been proposed as a way to manage the issue (Nair et al. 2016). However this approach does not take into account other factors which influence soil emissions such as soil structure, aggregate stability or overall health of the soil ecosystem. 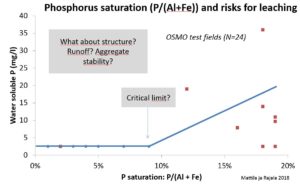 Figure 1. Phosphorus saturation (ratio of P to aluminium and iron) has been considered to be a good measure of phosphorus availability and risks for leaching. However it does not consider soil physical or biological components. Data based on measurements from 24 test fields. P saturation from H3A extraction.

We investigated 24 soil test plots for their phosphorus fractions as well as their overall soil health parameters. Phosphorus was measured using five different extractants: water, ammonium acetate, H3A mild acid excraction, Mehlich-3 and HCl. The soils had considerable reserves of phosphorus which would not be measured in the conventional ammonium acetate extraction. In addition, the relationship between readily available P and total P was not always straightforward, with some soils having a considerable amount of HCl-P but low soluble P and vice versa. 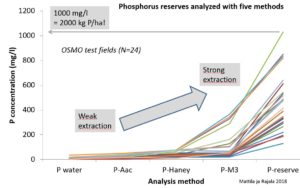 The soils differed also in relation to their structure, both in microscopic and macroscopic scale. Four of the investigated soils were found to be of especially high risk of phosphorus loss, as they had high P-saturation and low aggregate stability. In order to reduce the emissions from these soils, two different approaches can be employed: either to remove sufficient amounts from the soil to reduce P saturation or to improve aggregate stability to improve the soil water cycle and reduce runoff and erosion. Due to high amounts of accumulated P (Figure 3.), P removal would take a long time. Aggregate stability can be improved through liming, cover crops and increased organic matter, which also promote soil health and yields. 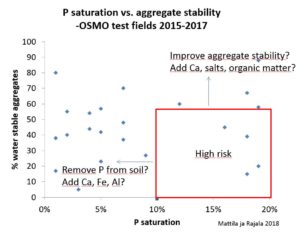 In addition to aggregate stability, also soil structure is a good indicator of soil productivity and emission risk. Visual evaluation of soil structure (VESS, Ball et al. 2007) can be used to quantify the differences.

With poor structure water will run-off on surface or go directly to drainage pipes through macropores. With good soil structure, water retention is high, water is directed to plant use and P has time to react with soil Fe and Al. 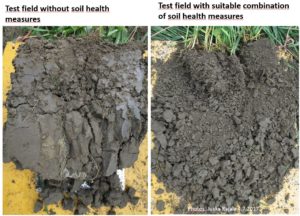 Soil phosphorus management is about more than just concentrations.